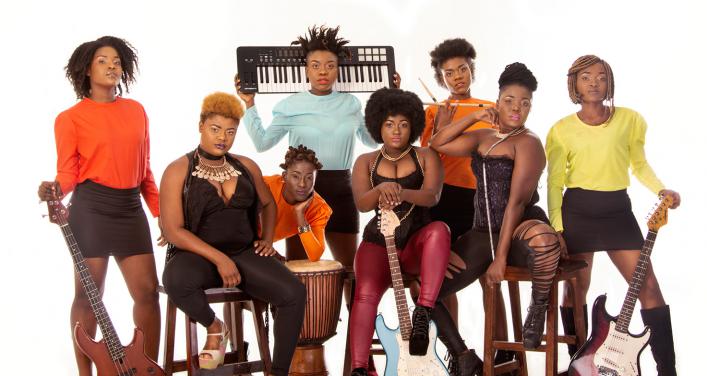 Artiz is an all-female group, among the few in Haiti. The members are three singers (Alexandra Cherrelus, Cynthia Michel, Claudia Barbara Philogène) and five instrumentalists (Véline Juste, Myrlande Louis, Samora Cynthia Julmisse, Sergina Choute Honoré et Marcelin Adjamille). Founded in 2014 by Emmanuella Michelle and featuring a world beat style, the group has been giving concerts since then in Haiti and Canada. These musicians have done a number of reissues, notably of “Okaman” by Ivorian singer Monique Séka. In 2016, they launched their first EP, Banm Chalé, produced with the artist Chabba (Djakout #1) and blending zouk, soka and soukous. The year 2016 was also when their performance at the Festival mondial de musiques des femmes d’ici et d’ailleurs (World festival of music by women from here and elsewhere) in Montréal earned them the title of “revelation.” In May 2017, on the occasion of Mother’s Day, they brought out the single “Manman” on YouTube. Their songs speak of major themes such as love and also of societal problems, violence against women or illness. With an artistic sensitivity that is their very own, they navigate among various styles: kompa, reggae, dancehall and traditional music. On stage, they show spectacular energy and a generosity that succeeds in conquering the crowds. They await the fruition of their project to record a debut album.