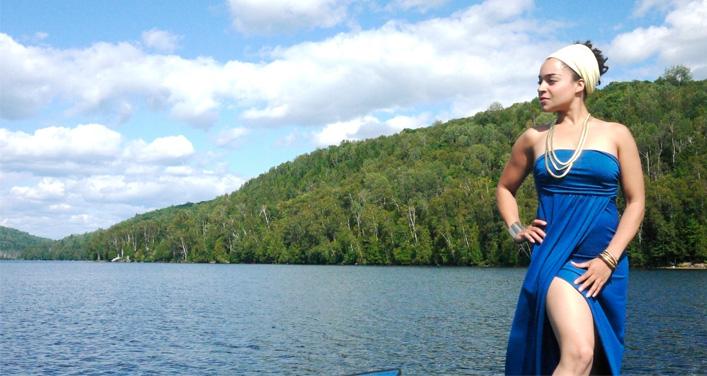 Athésia was born in Montreal of Haitian parents, she made her debut at age 14, singing for musicals, contests as well as the national holiday events. She went on studying classicalsinging in college.  One year later, she discovered the electronic music scene and freestyle singing. After this breakthrough revelation Athésia started to take singing courses with a jazz teacher at Mc Gill Conservatory of Music, she just loved it! That same year, she started to freestyle with numerous dj of Montreals underground scene (Deadbeat, Miguel Graça, Alain Vinet, etc.)

Experimenting and collaborating on diverse musical and multimedia projects, Athésia progressed slowly but surely to assume her place in this urban world.  Athésia performed in different clubs, festivals, corporate and charitable events as well as private parties. In 2004, thanks to a provincial programs that support young artist, she launched her début album: “Nostalgia.” Inspired by fado, tango, bosso nova with a touch of electronic music to the mix, “Nostalgia” made people discover another side of this young and talented singer, and her world-flavored side.

In 2006, L’Office Québec-Amériques pour la jeunesse, specially selected Athésia for a 2 months stay in Brazil. She was invited to perform for the private party of Vogue Magazine at Hotel Unique where she was singing with samba orchestra Vai Vai and with Apollo Nove playing the synthesizer. Actor/Singer Seu Jorge and Naomi Campbell hosted the gala event.  The destiny of life during this trip in Brazil presented Athésia with the unique opportunity to meet people that were instantly charmed with her album and offered her to perform a feature show of her compositions at the world renowned cultural center, SESC in Sao Paulo, one of the top venues to perform in the country. The night of the event, her show was sold out!

Athésia came back to Montreal with the desire to renew her past and decided to be accompanied in her city with local musicians, she created the band Athésia & The Gentlemen

In march 2010, Athésia was invited by The Canadian Consulates of Canada in Argentina, Brazil and Peru to represent Canada and sing accompanied by her musicians “The Gentlemen” for the celebration of the FRANCOPHONIE with the partnership of l’OQAJ. Athésia not only launched her new album (EP) Athésia & The Gentlemen but it was a great way of raising awareness about the situation in Haiti. With the collaboration of the Embassy of Haiti in Argentina and Brasilia, some of the profits of the shows and albums was given back to charities. The respond of the public was fantastic ! After 3 countries, 6 cities, 8 shows and 10 airplanes in 20 days, Athésia came back to her country moved and touched by her experience.

Some women and men have the benefit of a lot of help on the way up, from family connections or inherited wealth. Not so for Athésia! She is making it to the top through plain old fashion hard work, and a willingness to ignore traditional women’s roles. She was not brough up from a musical family but she’s lucky to have her family, friends, her musicians, artistics colleagues and especially the public believing in her talent and supporting her in this musical journey. Financing, managing all aspect of her career, Athésia is now ready to move on to a step forward in choosing the right team that will be able to represent her. Who will be the lucky one?

Athésia is presently performing in different venues, charitable events as well as private parties. Accompanied by her musicians The Gentlemen, they give a jazzy bossa nova flavor on the rhythms of Tango, Latin and Creole beat, what a pure delight!  Song writer, composer and performer, Athésia has a sensual entrancing voice with a powerful warm velvety feeling that is combined to a radiant and  charismatic presence  on stage.  Athésia sings in French, English, Creole, Portuguese and in her invented language “Athesian”. Athésia is what you may consider “une citoyenne du Monde” a citizen of the world!