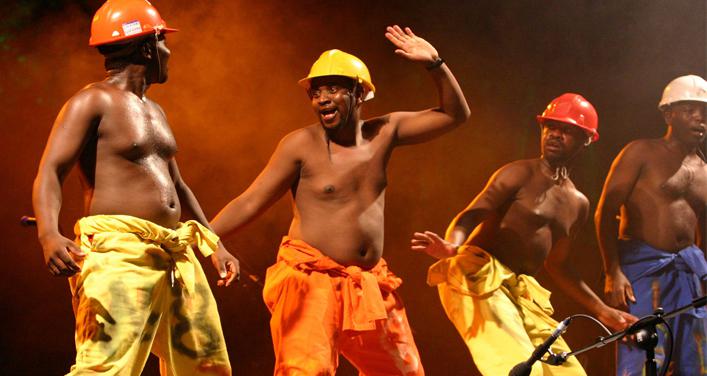 Black Umfolosi is an internationally acclaimed group that has conquered the world through more than 30 year career, he also defended the Imbube tradition with their a cappella performance that is found in both South Africa and Zimbabwe. It has often been compared to the South African vocal group Ladysmith Black Mambazo, made world famous group by its participation on the Paul Simon album Graceland.

Black Umfolosi is a self taught Acappella (Imbube) singing and traditional dance group that was formed in 1982 in Bulawayo by the then school age members who wanted to develop themselves and contribute to their community. Specialising in imbube music, gumboot dance and Zulu dance, Black Umfolosi has toured extensively nationally and internationally –Europe, USA, Canada, Australia and Asia. They have represented Zimbabwe at international events such as Expo 1992 in Seville, Spain and the 1994 Commonwealth Games in Victoria, Canada.

In the Community Black Umfolosi soon found the need to visit people to see and learn about different traditions, and then made it their mission to demonstrate and teach others around the world (including other African countries) about Southern African, traditional dance and music. Black Umfolosi expanded to become Black Umfolosi Performing Arts Project, acquired land and put up an Arts Centre.

Black Umfolosi Performing Arts Project is registered as a company. It is also registered with the Zimbabwe Ministry of Education, Sport, Art and Culture, as well as the Zimbabwean Arts Council. It is affiliated to various organisations, including the Zimbabwe Music Rights Association.

The mission statement of Black Umfolosi Performing Arts Project is: to promote, preserve and perform southern african traditional music and dance, while creating linkages with international, contemporary and traditional performing arts groups..To achieve this mission, Black Umfolosi seeks to: To create employment for its members.use the Arts in addressing various social, economic, cultural and topical issues.use the Arts as a vehicle for promoting social harmony and understanding amongst people of different backgrounds.

Their music is fresh and surprising, with typical intricate rhythms, unusual harmonies and interspersed clicking, clapping and shouting, which combine to produce a natural funky and rugged aura.” THE ROUGH GUIDE