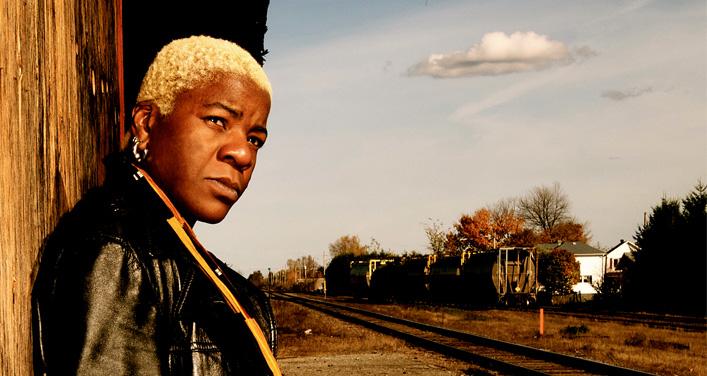 Soul, Versatility and Passion compose the triumviral force behind Cécile Doo-Kingué’s sound. Born in New York City, first generation from Cameroon, Cécile Doo-Kingué has lived in France, USA and is now an adopted Montrealer. This meeting of cultures is reflected in the eclecticism of her music. She has rapidly become one of the city’s most respected musicians. Her bewitching and incomparable fretwork as well as her deep and suave voice are no longer secret to Montreal’s night-owls. Cécile has sizzled and dazzled with Montreal cult bands Dibondoko and Aliens, played or recorded with Corneille, Senaya, Bernard Purdie, Tricia Foster, Montreal Jubilation Choir,  Ismael Isaac, Soul City, to name but a few, as well as opened for Manu Dibango and Youssou N’Dour.  She has also done her share of mixing, including United Steel Workers of Montreal’s albums Broken Trucks and Bottles and Kerosene & Coal, producing (Dibondoko) and musical directing, including Passion Francophonie, the main show for the XIIe Sommet de la Francophonie.  In 2008, Cecile and Gern f. of USWM started Chick Pickin’ Mondays, a weekly night promoting female singer-songwriters.

“The perfect tonic for any evening, sweltering or sub-polar”- Bill Brownstein, The Gazette

On record or on stage, Cécile Doo-Kingué takes us deep into a series of musical grooves. In June 2010, she  released her self-produced debut solo album Freedom Calling to critical acclaim. The 12-track collection is a smooth concoction of blues, soul and afro-folk  on which one can surf to the end of the world, life and love. From one song to the next, her mastery is undeniable. While she tames the blues with her sweet guitar, she opens the door to 60’s and 70’s soul, and afro rhythms. Lyrically, Cécile is as vulnerable (Beneath the Lies, Freedom Calling), as she is socially aware (Come Undone, Rise), seductive (Lettre à personne, What I Need) or even funny (Ma’s Kitchen, Dachshund Blues). Regardless of her mood, Cécile captivates you with sincerity while her sound soothes body and soul.

Grab a glass and your passport, relax and enjoy: ‘Freedom is Calling’.