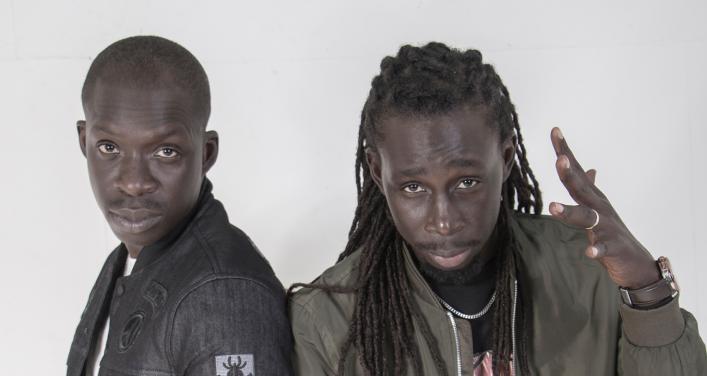 Degg J Force 3 (“Force 3 truth” in Wolof, the three forces being the right, the good and the true) is a group founded in 1997 in the Kaloum district of Conakry, Guinea, by brothers Moussa M’Baye and Ablaya M’Baye (alias Skandal) and by Moussa Camara (alias 2Pac). Between Afro-rap, Afro-reggae and dancehall, the trio stands out for its political and social commitment. They awaken consciences through the themes they raise while drawing their inspiration from the rich culture of the African continent. In 1999, they won an award at a talent competition with their song “Cri du cœur,” drawing attention to them and leading to concert invitations. Two years later, they brought out their first cassette, Mach Allah, on which they sang in Mandinka, Susu, Wolof, Peul, French and English, bearing a message of unity and peace and denouncing the precarious situation of African youth. They then won prestigious awards at the Djembé d’or and K7 d’or events. In 2004, they founded the Degg J Force 3 Bankhi company, which included a label (Meurs Libre Prod), a structure for organizing concerts and international tours (Urban Afreeka) and sound and audio-visual production studios (Mach Allah Studios). During the 2000s, the group engaged in various fruitful encounters, including collaboration with the Guinean Afro-rap group Silatigui (on the single Des hauts et des bas, Best Guinean Hip Hop Album at the K7 d’or) and with reggaeman Takana Zion (on the single Levez le rideau). In 2009, they launched their album Reste indépendant, in which they call upon young Africans to defend their freedom of expression and to take hold of Africa’s future. This album, with its nimble blend of traditional sounds and hip hop, again won them the prize for best album at the K7 d’or. The group underwent a change with the departure of Moussa Camara, but the M’Baye brothers continue the adventure. Their third album, Débrouillard, came out in 2011 and includes reissues from their first album, Mach Allah, in particular a remixed version of “Cri du cœur” with Senegalese singer Faada Freddy. The group then became the biggest award-winner in the history of the K7 d’or. In 2015, they recorded the single Gbin Gbin Soo “Renforts” 23° Syli, with the group Banlieuz’Art to support Guinea’s national football team in the Africa Cup of Nations. In 2017, their new album, Dynastie, finally appeared. Though now among the top musicians on the Guinean scene, they still take the time to show commitment, in the fight against AIDS and, through their humanitarian association 7ème Continent, in collecting funds to help in the distribution of medical equipment in Guinea and Benin.