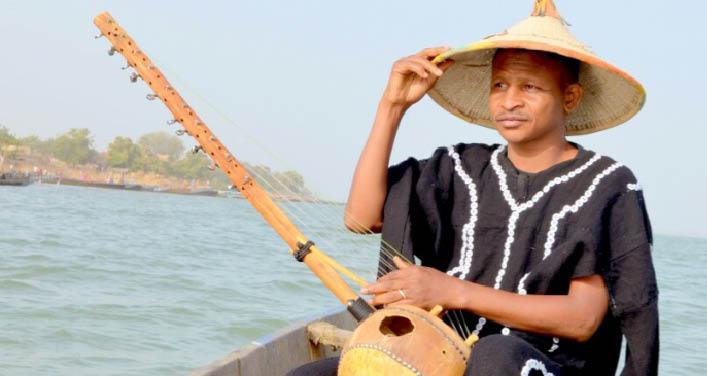 Burkina Faso musician Dicko Fils was born under the name Moulaye Dicko in a village near the capital, Ouagadougou. He studied French in Abidjan, where his father was working. The Ivorian reggae boom, then under way in the 1980s, would influence him greatly. His family then sent him to continue his studies in Mali, where he discovered the music of great musicians such as Salif Keita, Oumou Sangaré and Ali Farka Touré.

Upon returning to Abidjan in the early 1990s, he did not forget his passion for reggae. He worked for a time in clothing production but soon wished to devote himself exclusively to the musical group he founded, Le Faso Kanou. In 2005 there appeared an initial album, Tounga, between reggae and Mandinka blues. With this first experience fulfilled, Dicko Fils felt a need to return to his roots, and he came back to live in Burkina Faso.

He put his group back together, blending traditional instruments (balafon, djembé, tamani) with contemporary ones (drums, guitar, bass). Dicko Fils took hold of the instrument he mastered to perfection: the kamalen n’goni. Two chorister-dancers then joined the group. The reputation of Dicko Fils would quickly grow throughout West Africa. His melodious and malleable voice transcended the rhythms of his country, also taking hold of Dyula tradition and Peul culture.

In the following years, albums appeared at a regular pace: Lada Koro in 2007, Farafina in 2010, Sababou in 2012 and Fina-Tawa in 2014, with the “Denke Denke” track becoming a real hit. As a well rounded artist, he also took part in several theatrical creations. In 2011, the Burkina Faso ministry of culture bestowed upon him the Croix de Chevalier de l’ordre du Mérite. And in 2016, the year his sixth album, Wakati, was released, he won the Kundé d’Or, the prestigious award for best music in Burkina Faso.

Early in 2018, Dicko Fils brought out his latest album, Jaangô. Sung in Dyula, Fulfulde, Moré and French to reach the greatest possible number of people, this new opus focuses on education, especially for young nomadic Peul girls. The artist attacks premature marriage, urges parents to send their children to school and raises themes such as integration, peace and love, calling for foresight and for taking care of the presence to prepare better for the future.