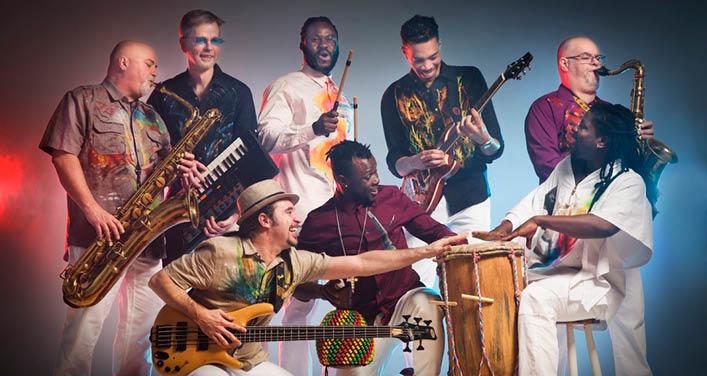 The Ensemble Afrovibes, founded in the fall of 2014 by Haitian percussionist Emmanuel Delly, consists of eight musicians of varied cultures and backgrounds.

The group offers a new and unique sound rooted in Haitian voodoo with its beats (Rara de Léogane, Ibo, Nago, Agbadja, Djoumba, Dahomey) and chants destined to the Divinities. It also delves into the roots of Afrobeat creator Fela Anikulapo Kuti.

It is the first group to offer a Voodoobeat and Afrobeat fusion on the Québec scene.

Ensemble Afrovibes takes you into a world of sounds and beats from Haitian voodoo, Afrobeat, bel-air from Martinique and other traditional beats from Latin America. This eclectic world reflects the cultural diversity of the group’s members and combines fusion atmospheres of soul, rock and jazz.

The group has a good stage presence, bringing audiences to share a positive, exuberant and contagious energy, giving them an enthralling, spiritual and captivating experience.