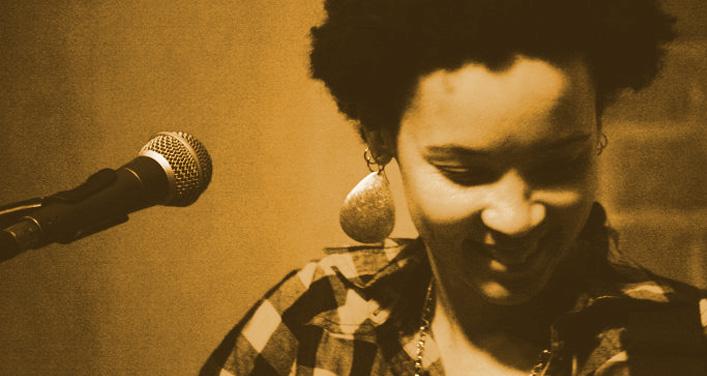 Drawing musical inspiration from her Afro-Canadian background, Kimberly Sunstrum’s sound has been described as a unique blend of acoustic-soul and folk, powered by solid rhythms, catchy melodies and strong vocals. Based out of Montreal, Canada, Kimberly Sunstrum is a powerful vocal force, capturing and awing audiences with every performance.

After emerging on the Canadian music scene in 2005 in Ottawa, she spent a year performing solo, entertaining fans with her  soulful vocal talent with the aid of her acoustic guitar. She quickly began sharing the stage with other local artists at Ottawa’s Avent Garde, Live Lounge, Rainbow Room, le Petit Chicago, Ou Qoui, 4 Jeudi, Toronto’s Slack’s, and Montreals, Le Confessional, Acoustica, and Bob Marley Inspiration at le Balatou.

Sunstrum began her musical journey in Gaborone, Botswana, where she spent much of her youth. Picking up her first guitar at 16, Kimberly quickly taught herself to play, conceptualizing the lyrical melodies stirring in her mind. Shortly after, she added piano to her repertoire. Her piano songs have been described as, “a deep exploration into a new and intriguing alternate aspect of composition and style”.

Over the last 5 years Kimberly Sunstrum has collaborated with an eclectic ensemble of experienced musicians, in order to broaden and diversify her music while always maintaining a strong tie to her African roots. Having both traveled and lived abroad throughout her formative years, she brings a unique blend of rhythms, soul and R&B to acoustic-folk.

Kimberly draws inspiration from her influences, including Lauren Hill, Tracy Chapman, Radiohead, Nina Simone, Bongo Muffin and Billie Holiday and from her personal struggles, being a young bi-racial woman growing up in unsafe and sometimes intolerant communities.

After completing a BA in Sociology and Women’s Studies in Ottawa, she decided to move to Montreal, a city thriving with music, culture, and art, to further pursue her music career, as well as attain a diploma in Sound and Audio recording. During this process she managed to master the art of sound and audio recording. With these new learned skills, Sunstrum recorded, mixed and mastered her latest EP in the hub and hum of Montreal’s Old Port.
The self-titled EP will be released late November 2010, and fans can expect some  surprises.