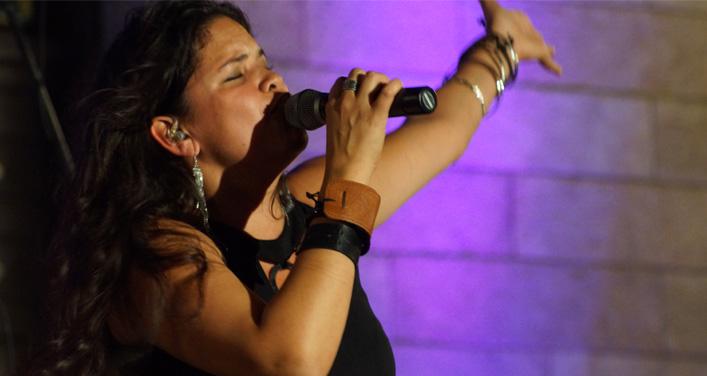 From Chilean origin, Mistysa (pronounced “Mist-I-sa”) was born in Canada where she lived until her 11th birthday. She then lived in France, Brazil, Argentina, Britain and Chile, soaking up different cultures and music. Her repertoire is varied, combining blues, gospel, soul, funk, Brazilian music and Latin American folklore. Her musical training began with vocal studies in Brazil, followed by singing and piano lessons in Canada, and musical composition and arrangements in Chile. With over 15 years of stage experience, Mistysa is a confirmed artist who sings in English, Spanish, Portuguese and French. She was a soloist of Jireh Gospel Choir in Montreal, sang with Inti-Illimani and Kitchener in London, with Angel Parra in Paris, and with the bluesman Eddie C. Campbell in Santiago. She has shared the stage with famous names such as Dawn Tyler Watson and Norman Brathwaite at the Blues Festival du Mont-Tremblant in 2012. Winner of the Music Fund granted by the Council of Culture and Arts of Chile, after the release of her album “Macumba” (2006), she made three international tours, in Chile, in France and in Quebec between 2009 and 2012.