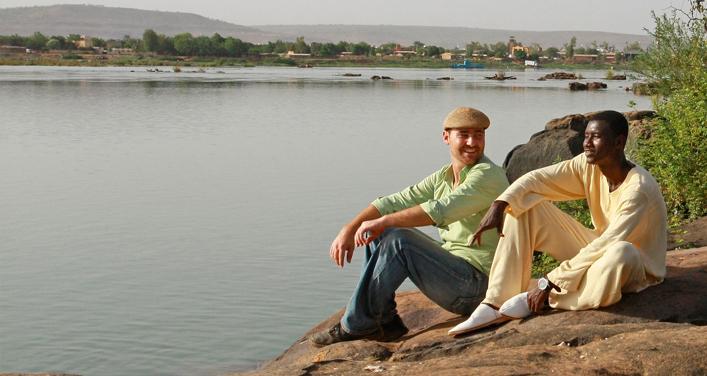 Nearly four years after their first meeting , Moustafa Kouyaté and Romain Malagnoux finally have the imaginary boundaries . Result of a trip to Mali , where Kouyaté are considered the kings of the griots , real adventure punctuated by chance encounters , they recorded this album Salif Keita ‘s studio in Bamako. To celebrate the release , they invite you to a launch formula – show Wednesday, November 13 at 20:30 at Club Balattou Montreal and Friday, November 15 at 20h at the Palais Montcalm in Quebec. Two evenings carefully orchestrated , the result of an artistic residency at the Amp Quebec staged by Alain Bertrand , who has chosen to highlight this unique poetry that comes from the research of intercultural dialogue transcending every piece of Frontiers Imaginary . On stage, five musicians , including three from the ancient African traditions of the West, will unite to make you travel . Malian blues , ballads, and energetic dance tracks , all steeped in traditions and musical vibrations of the Malian people , sung in Bambara and French .

A taste of the story …

Capita then in the suburbs of Paris , Romain Malagnoux nourishes the dream to go to Bamako , the Malian musicians play with and learn from their music so rich. Ten years later, residents of Quebec , he left for a trip to Mali . There, he meets his idol, Bassekou Kouyate ( two Grammy nominations and mirror Price of Quebec City Summer Festival in 2010) and at the same time his son , Mustafa Kouyaté .

Between Moustafa and Roman chemistry operates immediately and the idea of ​​recording an album takes shape naturally . Several pieces then emerge … most often at night on a roof of a warm wind swept in the hills of Bamako ! Sometimes Diamy Sacko joined the two dreamers to put his voice on their improvisations.

Most of the musicians on the album are Malians around the Kouyaté family, including his idol and inspiration Bassekou Kouyate , the balafon renowned fire Kélétigui Diabaté , singer Amy Sacko and calebassiste Alou Coulibaly . Other musicians enrich this album . Marc Fournier, Quebec native , who put his bass lines with ease and wealth and Cye Wood ( violinist, met at the Quebec City Summer Festival while playing with Yeshe ) was able to add another color from Australia where he resides. Proof , if any were needed , that the borders are well imaginary …