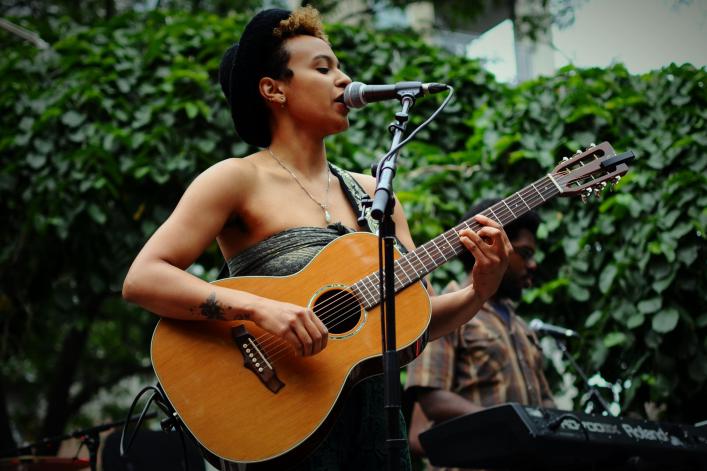 Athena Holmes is a vocalist, guitarist and songwriter known by the stage name Ms.Holmes. Raised in B.C. and based out of Montreal, Holmes was born into a family of performers who count Jimi Hendrix and Little Richard among friends.

Inspired by the message of folk music, the rhythm of the blues and the tonality of jazz, Holmes’ sound is unmistakable. Their début LP “TEN” was released in 2015. Produced alongside the Félix Leclerc Prize nominated Paul Cargnello, “”TEN” features heavy layers of percussion and vocal harmonies from song to song. The record was supported by a crowdfunding campaign that surpassed it’s goal through Kickstarter.com.

With a background in photography, Holmes has always had the ability to link the visual with the musical. In 2016 their video for “The Hurtin’ One” (directed by Jess Lee) made history as the first music video shown at The Black International Film Festival in Nashville. For “Gotta Get Away”, Holmes collaborated with Métis artist Dayna Danger. The video premiered on Exclaim.ca.

Stepping out of their comfort zone in 2017, Holmes took take part in the 5th season of La Voix (The Voice Canada). The choice paid off. They delivered three show stopping performances, and gained international exposure working with coaches Pierre and Eric Lapointe.

Ms.Holmes is currently living and performing in Montreal, QC while developing their second album.