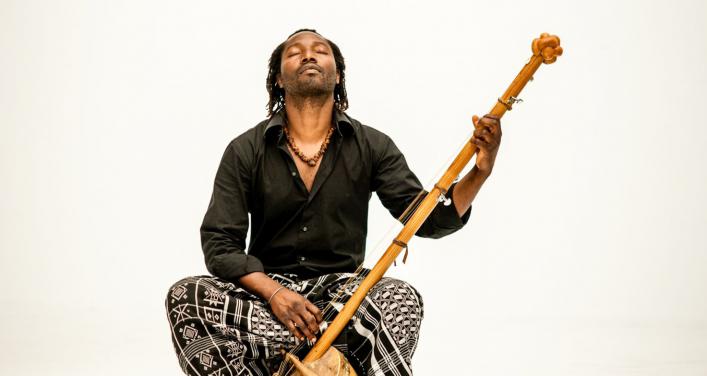 Singer, poet, composer, multi-instrumentalist – Mû Mbana is all of these things. Born on the island of Bolama, in Guinea-Bissau, he grew up in surroundings imbued with music, in particular through the religious chants of the Brame and Bidjugu peoples. What Mû Mbaba offers is a spiritual and poetic style of music carried by his velvety voice and the sounds of traditional instruments such as the simbi and the tonkorongh. It dwells on experience, limpid and essential.

Mû Mbana has performed on numerous stages in Africa and Europe, as well as on the American continent, and has put out no fewer than 10 albums. In the course of his projects, he has had the opportunity to work with artists from varied backgrounds, including Selva de Mar, La Locomotora Negra, Manu Dibango, Simão Felix, Rosa Zaragoza, Lula Pena, Jurandir Santana and Fabiana Cozza. He works today in Bissau and in Barcelona, alternating between solo projects and collaborations, such as the Nua Trio (with Javier Colina and Jesus Mañeru), the Mû & Sasha duet (with Israeli cellist Sasha Agranov), the Mornas Ku Nghuni Nghunidúras project with Cristobal Montesdeoca (a tribute to the musical greats of Guinea-Bissau) and the Colectivo BDB group.

After 20 years working with other musicians, Mû Mbana has brought out his first solo album, IÑÉN, in 2017, accompanied mostly by his simbi. This album marks a new stage in his work, with a selection of compositions of reflexive scope with deep intonations. We are eager to see what follows.