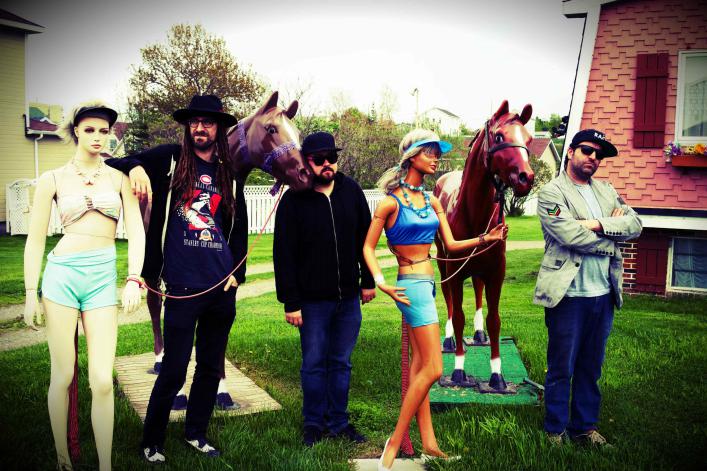 Okapi, a reggae band from Quebec, was born in the winter of 2016. Tired of the cold weather, the project’s creators are fond of the idea of a reggae band, in the form of “sound system”, combining Quebec patois with Caribbean classical rhythms. The songs soon accumulated and after some performances in Montreal, a video clip offer for the song K.Li.T. (pronounce “quality”) reaches them. As surprising as it may seem, this opportunity comes from a videographer friend who was looking to sell his condo (!). The result is a video shot in the streets of the city, much like Okapi, funny, colorful and seriously effective. This is “advertising” pirouette makes sure that the clip is seen on various design blogs and immediately compiles many views on Youtube. But the story does not end there. The quality of the production as well as the “worm” side of the title attracts the attention of commercial radio in search of a hot song to be played everywhere in Quebec. This is how the Okapi group finds itself with a beautiful problem: producing a complete album. It’s in the spring of 2017 that Okapi launches its first album entitled Hot Sauce Piquante. Twelve songs and three dub versions are making their way onto the album. Well received by the critics and appreciated by connoisseurs Hot Sauce Piquante propels the group towards a first tour: the Education Tour. With the primary goal of making the crowds dance and sharing the love of reggae, the “education” side stems from a desperate need to expose the Quebec population to the various reggae currents. Surprisingly little known by the Belle Province, Okapi guys do not hesitate to stop the show to explain a detail in music, lyrics or to quote the classics. In the end people get an excellent evening with some knowledge of music and reggae culture in general. Why call the Okapi group? The guys at the origin of the project are not neophytes of the scene having previously been in the group Mad’MoiZèle Giraf who gave in the pop music tinged with reggae in a good mood. Being the only other animal in the giraffe’s family, Okapi was sort of an easy choice. Okapi wants to be an uncompromising reggae project it was better to go with a new name to differentiate projects. Reggae is universal, Okapi’s approach is in line with the sound system where various riddims, well known to the general public, are integral part of the benefits. The songs are built to evoke the classics, to engage the audience by the recognition of these and of course by putting forward the good vibrations going with the genre. Okapi is the #reggaekeb at its best.