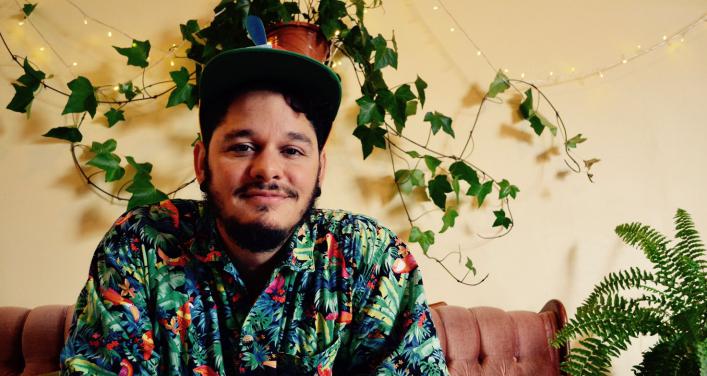 The fusion of sounds, beats and languages that characterizes Ramon Chicharron comes from his Colombian roots, with Afro-Colombian cumbia and champeta beats mixing with salsa.

Soon after arriving in Montréal, he decided to launch his own musical project, which he called Ramon y su Son. This initial project blended cumbia, Cuban son and cha cha cha. In 2011, he recorded his first five-song EP, Pal’ Monte. Following this album, he continued to search for a sound closer to his Colombian roots, and he set up a small studio in his apartment. He recorded 10 songs that would form the album Uepaje, which he launched in December 2015. After some thought, he gave up the name Ramon y su Son and renamed his project Ramon Chicharron. Celebrating the ancestral Afro-Colombian beats of cumbia, puya, bullerengue and tambora, to which he added trombone, clarinet and “psycho-tropical” guitar, he created a musical fusion that he called “cumbia chicharronica.” With lyrics inspired by the goddess Pachamama (“Puya Amazonica”) and the situation of immigrants (“El Tren,” “Planeta Flotante”), Ramon Chicharron hopes to share a message of conscience while preserving Afro-Colombian folklore. In July 2016, the Festival Traditions du monde in Sherbrooke gave him the “Coup de Coeur” award.