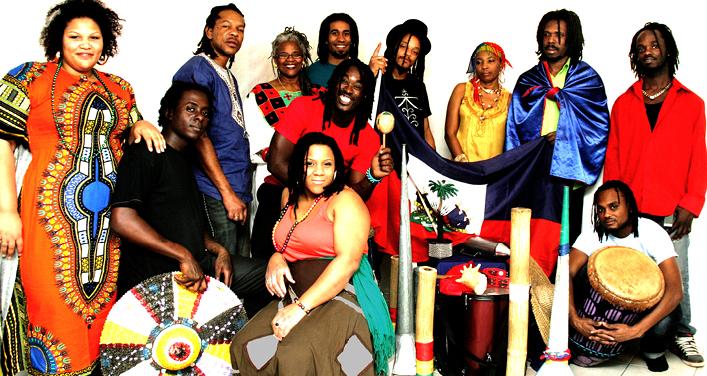 Rara Soley is a musical group, formed in Montreal in 2013, and made up of 10 musicians and 3 singers. Artistic director Ronald Nazaire (of Haitian descent) plays the tambourine, a skill passed down from father to son. Having formed several groups in Montreal, he played with many of the artists who are now part of Rara Soley. Rara Soley’s mission is first and foremost to promote and conserve traditional Haitian culture.  Their goal is to promote and popularize the rhythms and ancestral songs of the voodoo tradition. Rara Soley’s music is rich in new sounds—Haitian drums (Tanbou), horns (Vaksin), graters (Graj), the cha-cha, and vocals produce music that touches the soul, creating a high-intensity, electric, and therapeutic atmosphere, where one can communicate with the ancestral spirits. Rara is a musical style that comes from traditional Haitian peasantry and is based on the Lakou (the sacred courtyard). Rara, modeled on the Haitian tradition, brings together both African and Amerindian heritages.