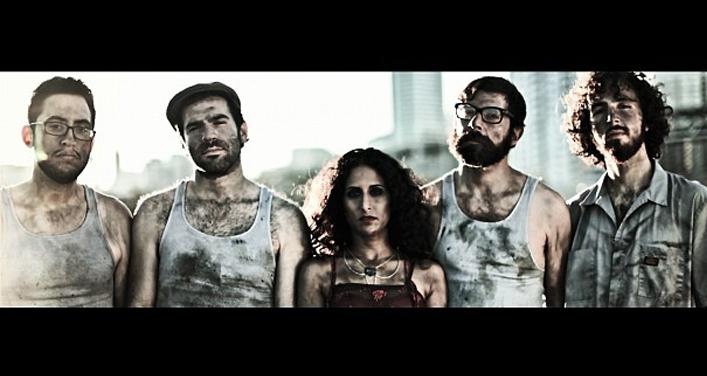 RUPA AND THE APRIL FISHES

Four years, festivals and village concerts on three continents, two previous albums, several languages from Hindi to Tzotzil to French, many musical traditions, and countless moments of joy, sorrow, loss, and transformation were the construction materials that came together for Rupa and the April Fishes’ riveting new album Build. This collaboration with brilliant producer Todd Sickafoose travels the long road from solitude to solidarity in both directions.
The band’s first album Extraordinary Rendition examines love from many angles, with lyrics mostly in French; the second Este Mundo traces the plight of migrants crossing borders, largely in Spanish; Build is their first album primarily in English. Its thirteen songs arise from this particularly tender moment of global upheaval, from the collapse of capitalism and false democracies to the rise of populist movements from Tunisia to Chile to Athens to Wall Street. Playing live to varied audiences around the world has been the best way to carry out their mandate of learning how to see what is invisible and combat widespread social demoralization, the source that feeds these songs.
The musicians, Aaron Kierbel and Safa Shokrai, Misha Khalikulov and Mario Alberto Silva, came from all over the world, Uzbekhistan to Nicaragua to Los Angeles, and converged in San Francisco to become the April Fishes with ringleader Rupa whose Hindustani roots settled in California with an interlude in Southern France. In their work together, musical languages from converge around the world, from punk to indie rock, from reggae to raga to rockabolly, chanson to cumbia, from Malian guitar patterns to mournful duduk melodies. In other times and places musical traditions have met to forge a sound that is more insistence than resistance; this band, this album, belong to that long tradition of rebel music.
+++Rupa & the April Fishes+++Build+++

What if we were as vulnerable as dry dandelions and one puff of wind could send us in a thousand directions? What if we were as resilient as weeds and could seed ourselves everywhere? What if fragility and force were both necessary for the life we dreamed of? What if we could send out roots that could hold hands under the earth where the dead lie and the seeds sprout? What if we fed on sorrow the way that butterflies feed on nectar? What if the only alternative to suffering was to surrender to the open road? What if the only home we would ever be given would be that road that never ends? What if we were constantly called upon to to die a little death in order to be reborn? What if every morning we were farmers who planted hope and every evening we were refugees who packed up and moved on from everything we’ve ever known?

The memory of the millions silenced by torture and disappeared makes you want to sing loud enough to wake the dead and break the chains. They make you want to write songs to cut through barbed wire and suture broken hearts. You sing because you believe that moments flash up in history, in our history, now when one weaponless youth can hold off a platoon of riot police, when the tenderness of her hope is stronger than their orthodox fury. You make music because the beauty of her example is like a song itself, a voice of love that reaches stranger’s ears. You sing because you believe that if we sang and danced together long enough, passionately enough, time itself would travel backward, and each of us would be able to speak all languages and say thank you ten thousand ways. Words and sounds are also tools, singing and playing music are also labor, and these too can help build everything again, ourselves, our lives, our villages and cities and democracies and dreams and loves, build them out of stories and suffering and the deepest memories and the force of imagination. That’s how the music goes here.