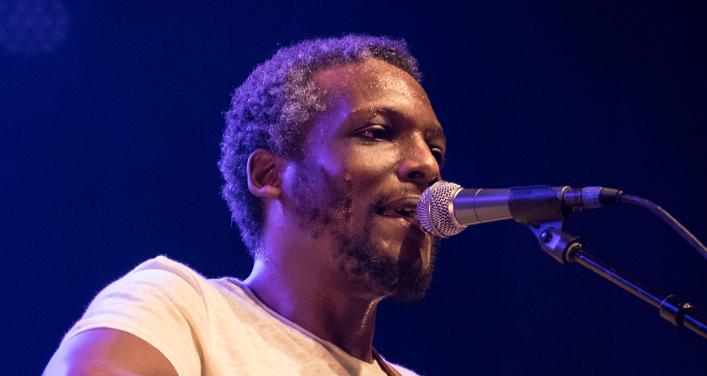 Viewed as a leader of the new emerging Tunisian scene, Sabry Mosbah grew up in a family where music had a special place: his father, Slah Mosbah, was a famous Tunisian variety singer. The future artist’s childhood was thus cradled in the country’s musical tradition.

In 2000, he began a career as a sound technician, musical arranger and recording engineer in various studios. This was when he began learning keyboard and guitar.

In 2010, the reinterpretation of the song “Madhlouma” that he recorded as a trio with oud player Fadhel Boubaker and singer Fahmi achieved huge success on social networks. In the same year, he met slammer Hatem Karoui, with whom he presented a performance during the Dream City festival in the Tunis medina. Success enabled this duet to endure, soon giving rise to the Kif Kif show.

In the mid-2000s, the artist embarked on a solo career. He launched his own YouTube channel with the Kitch’Sessions, videos in which he took up classics from the Tunisian repertory as well as famous rock numbers. Meanwhile, he began writing his own songs and performing his unifying lyrics with his acoustic guitar and his very special voice.

In 2017, Sabry Mosbah issued an initial album, A S L Y, produced in Tunis, Paris and Brussels. From Tunisian folkloric music to modern rock and folk sounds, the broad spectrum of the artist’s influences resonates stylishly. Retakes of songs run alongside original compositions, written in Tunisian dialect. The artist revisits his country’s musical heritage through a novel approach. The electric oud, fretless guitar and basses create enchanting rhythms and an atmosphere conducive to trances.