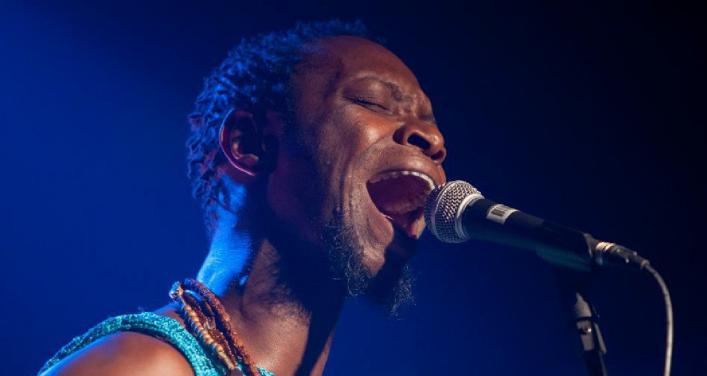 A musician, singer, songwriter-composer and multi-instrumentalist, Sergio Pererê is a one-of-a-kind performer. Guitar, djembe, charango, violin: his mastery of several instruments, in addition to percussions, puts him from the get-go among the more unusual of musicians. To this is added the songwriter, whose works have been recorded in many studios and sung by artists including John Bosco, Milton Nascimento, Chico César and Vander Lee.

Born in Bairro Novo Glória, a district in the Brazilian city of Belo Horizonte, Pererê was introduced to music at a very early age. Influenced by blues and progressive rock, he first created the group Avone, for which he began his work as a composer. He would later form a quartet with guitarists Meliandro Gallinari and Rafael Trapiello and Argentine flutist Andreia Cecilia Romero. In 1995, there emerged Tambolele, a group formed with Santonne Lobato and Giovanne Sassá. The group released two albums and set out on a tour of Europe, the United States, New Zealand and Mexico. Meanwhile, the group was conducting a socio-cultural project focused on teaching percussions to young people.

Pererê’s solo career is nevertheless more revealing of his aspirations and of his desire to blend African sounds with more contemporary trends. He has issued five albums: Star Line (2005), Labidumba (2008), Alma Grande, Ao Vivo (2010) and Serafim (2011), as well as Viamão (2016) in collaboration with the Argentine group No Chilla. Pererê has also shared the stage with Milton Nascimento, Naná Vasconcelos, Wagner Tiso and João Bosco. In 2015, he collaborated with Zal Sissokho and Marcus Viana on the album Famalê, an original trio with compositions in Portuguese, French, Wolof and Mandinka that thrilled the audience at the Festival international des Nuits d’Afrique at the time. Sergio Pererê is currently part of the group Sacred Heart of Earth alongside Marcus Viana.