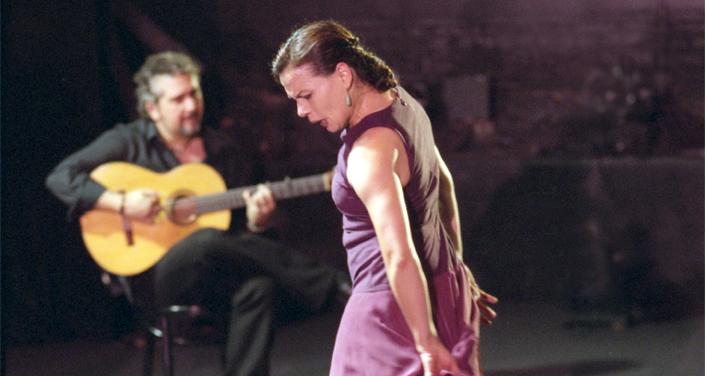 Formed in 1993 by Martín Santangelo and his Bessie award-winning wife, Soledad Barrio, Noche Flamenca regularly tours around the globe. Performance highlights include regular seasons in New York City and Buenos Aires, performances in Greece and Egypt, annual tours throughout North America, and the company’s 2002 and 2009 tours to Australia.

Hailed by critics everywhere for its transcendent and deeply emotional performances, Noche Flamenca is recognized as the most authentic flamenco touring company in the field today.  Santangelo has successfully brought to the stage the essence, purity, and integrity of one of the world’s most complex and mysterious art forms without the use of tricks or gimmicks. All aspects of flamenco – dance, song, and music – are interrelated and given equal weight in the presentations of Noche Flamenca, creating a true communal spirit within the company – the very heart and soul of flamenco.

In support of its mission to educate and enlighten audiences about flamenco, the company offers extensive residency programs that reach out to people of all ages. Noche Flamenca is registered as a US not-for-profit with its office and representation based in New York City. Noche Flamenca’s artistic integrity has been recognized with awards from the National Dance Project (2006), the National Endowment for the Arts (2007 & 2008), and the Lucille Lortel Award for Special Theatrical Experience (2003), among others.

The mission of Noche Flamenca is to create a diverse theatrical body of performance through song, music, and dance that expresses a rigorous, spell-binding aesthetic in the form of flamenco; one that exceeds the highest artistic expectations. The company strives to captivate its audiences through its live performances and to evoke in them the vivid and expansive sea of passion and emotion that is flamenco. Through its educational outreach and residency programs, the company seeks to educate and enlighten persons of all ages, races, and economic backgrounds regarding the authentic form of flamenco – a form born of ancestral cultural repression and racial expulsion.

Soledad Barrio was born in Madrid. She has appeared as soloist with Manuela Vargas, Blanca del Rey, Luisillo, El Guito, Manolete, Cristobal Reyes, El Toleo, Ballet Espanol de Paco Romero, Festival Flamenco and many other companies. She has performed throughout Europe, Japan, North and South America with artists such as Alejandro Granados, Isabel Bayón, Jesus Torres, Miguel Perez, Manolo Marin, Javier Barón, Merce Esmeralda, Rafael Campallo, and Belen Maya. She has won awards from over 12 different countries around the globe for her excellence in dance. She recently received a “Bessie” award for Outstanding Creative Achievement. She is a founding member of Noche Flamenca with her husband Martín Santangelo.