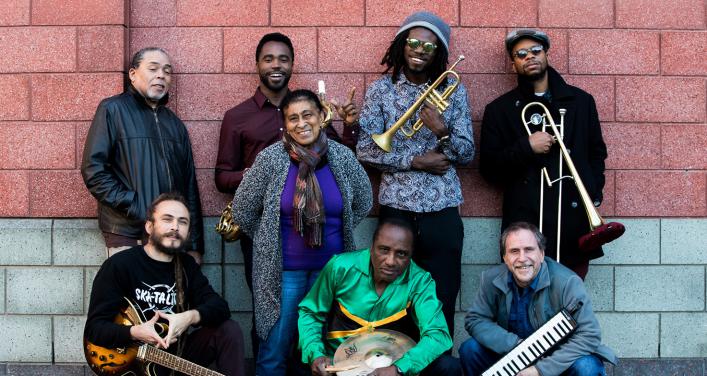 The Skatalites, a vital part of ska since the group’s creation, is a musical meteorite, an unforgettable energy bomb, a concentrate of musical invention. Blending boogie-woogie, blues, R&B, jazz, mento, calypso and African beats, the group arose soon after the independence of their Jamaican homeland, bringing together several top musicians in a single group. A stunning mixture. Starting as the Sheiks in 1962 and then the Cavaliers in 1963, the Skatalites took their current name in 1964. The nine members who created the group were all jazz band musicians, experienced and recognized. Don Dummond, regarded as one of the world’s top jazz trombonists, wrote most of the pieces and headed the group, together with tenor saxophonist Tommy McCook. Their success was immediate. First they seduced their fellow citizens, enchanted by the “made in Jamaica” sound. They soon flooded the world. But in 1965, for various reasons, the Skatalites ended this great adventure. A long awaited return Fortunately, this was just a temporary interruption. In 1983, the group partially formed again, for a concert at the Reggae Sunsplash festival. This was a huge success, and the Skatalites agreed to resume their adventure. A tour and a 1984 album, Return of the Big Guns, delighted fans. From 1991 to 1993, the group conducted its first truly international tour, with some of its initial members, and played for the first time in Europe. In 1995, Hi-Bop Ska was nominated in the Grammy Awards as best reggae album, followed by Greetings from Skamania in 1997. The excellent album Ball of Fire, a true wonder of ska, came out in 1998. Despite the deaths of some members, including Don Drummond and Tommy McCook, and some departures, the group is still touring, with growing success from one year to the next. In 2003 it brought out From Paris With Love, an album recorded in Paris, and the following year came Roots Party, a live album recorded in Brussels. The Skatalites in Orbit, a live album recorded in Buenos Aires, came out in 2006, followed in 2007 by a studio album recorded in Australia, On the Right Track, with the same members, who set off on a European tour lasting several months. Since then, the group has brought out Rolling Steady in 2008, Walk With Me in 2013 and their latest album, Platinum Ska, in 2016, followed by a worldwide tour. The early 2010s saw the departure of two founding members, Lloyd Brevett and Lloyd Knibb, whose last recordings appear on the album Walk With Me. But all the same, the group keeps on pursuing its adventure and renewing itself nearly 55 years after it first emerged. The Skatalites still include old-timers (Doreen Shaffer and Lester Sterling) alongside the newer members. The group maintains its energy and its immense talent. Each of their concerts is a long awaited moment, the promise of an outstanding and unforgettable experience.