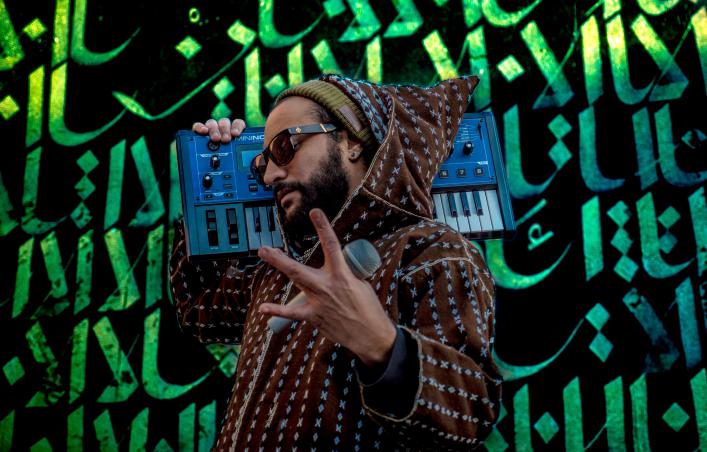 (Houssine Saik), musician, composer and performer
Following his debut in HipHop and Reggae in Morocco 2000 as a MC and BeatMaker, he decided to come study music in Canada and chose to settle in Montreal in 2006.
He focused on the composition of Arabic & Middle Eastern electronic music and released his first EP in 2009 (fast food) under the name of Casa Del Tarabe, a first experience that allowed him to define his musical identity and experiment the fusion of different musical genres.
In 2011, he founded the project YUDA* as a rapper and singer with one of the pioneers of Moroccan Rai Reggae set up in Montreal (Badr Belhachemi) of the Moroccan Group (DARGA), they record 2 titles Wa chef* and Democrazy*.
While continuing to work on his personal compositions and his musical aesthetics, he formed, in 2015, the Band Wagna * (Gnawa Electro) that performed multiple world music festivals in Montreal such as the Festival de musique du Maghreb, as well as the Montreal Nuits d’Afrique Festival, the Orientalys Festival and the Arab World Festival.
In 2016, he works on an instrumental album with Montreal DJ HAB and releases an EP Edesse* Electronic Arabic Beats.
In 2017, he integrates the band Rebel Moon* that performs in shows such as des Vitrines locales métissées and Mundial Montreal.
With a few years of experience in music, creation, and a dozen of shows, Wu-Sen has surrounded himself with talented musicians, such as Arthur Evenard, keyboard, Fanny D. vocals & back vocals, Yassine Boudouch, guitar-jazz & gombri, and Ismael Iraki, drums, with whom he works on his solo world music album in a Hip-Hop format with jazzy aromas all merged with traditional sounds.