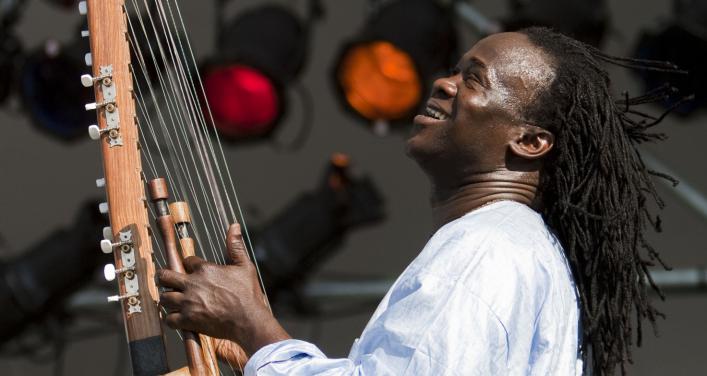 Three great families perpetuate the memory and traditions of the Mandinka people of West Africa: the Kouyaté, Diabaté and Sissokho families. For this Night of the Kora, Nuits d’Afrique has the honour of hosting two representatives of this long line of griots.

Senegalese-born Zal Sissokho has played the kora since age 11, and he soon began singing and composing songs, in Mandinka and in Wolof, inspired by the West African repertory. He honed his kora-playing abilities with the master Toumani Kouyaté and later accompanied Senegalese lyricist and performer El Hadj N’Diaye.

In the 1980s, he became one of the first griots to settle in Québec and soon became part of the artistic community, which was quick to notice his talent for improvisation on his 21-string kora. He began a solo career and accompanied renowned Québec artists such as Richard Séguin and Corneille. He also took part in the composition of the soundtracks for the Cirque du Soleil show “O” in Las Vegas, for the film “A Sunday in Kigali” and for the documentary film “La symphonie du nouveau monde.”

With these experiences behind him, he created Buntalo, his own musical group, in 2004, and recorded three albums with them: Silaba in 2008, Le Partage in 2012 and La Palabre in 2017 under the Disques Nuits d’Afrique label. Mandinka classics mix with Western influences and integrate Sissoko’s collaborations with artists from Brazil, where he has toured since 2010.