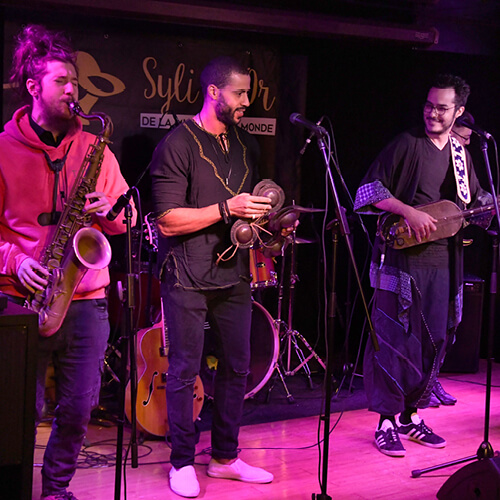 Boulila is an African fusion group offering gnawa, jazz, blues, funk and Afrobeat. Founded in 2016 by Boudouch Yassine, it performed as a traditional group in various Montréal bars applying this formula until 2019, when the “fusion” ensemble was created. The group has collaborated with many artists, including Wu-Sen Family, Marocouleurs and The Kais.

The group has hit it off with Canadian media. “As the two singers perform, backed by what is both a jazz and gnawa band in its rhythmic forms, somewhat reminiscent of the Tuareg rock sound, Boudouch also shows himself to be a skilled jazz electric guitarist. But Boulila’s secret weapon is named Damien-Jade Cyr. This saxophonist, involved in various projects on the Québec jazz scene, starting with those of bass player Carl Mayotte, has provided inspiring solos, magnifying the band’s songs. Boulila has truly broken through. We can hardly wait to see them explode on stage, in front of a real audience to applaud them.” – Philippe Renaud, Le Devoir, 2021

Boulila won first prize in the 14th Syli d’Or of World Music at the Club Balattou in Montréal.

Their concert will take you on a journey through African sounds in a mystical atmosphere. Discover the magical sound of the guembri and the trance rhythms of the crotales!