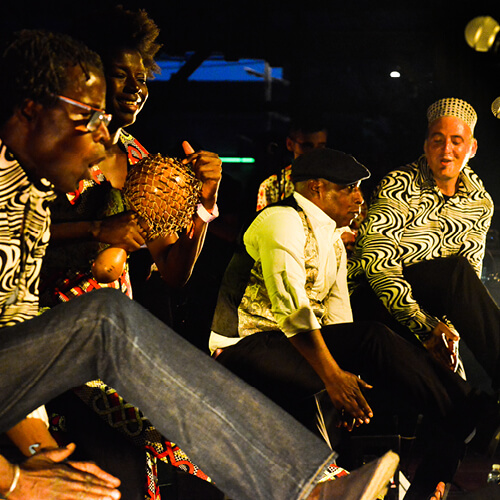 Nuits d’Afrique anniversary special: 35 years of stories and music encapsulated in an explosive celebration, to be seen and reseen. It’s going to rock!

More than two years after stepping aside, the three MCs of the France Inter radio show L’Afrique enchantée, Soro Solo, Vladimir Cagnolari and Hortense Volle, along with the band Les Mercenaires de l’Ambiance, are back on stage for one reason and one reason only: to celebrate the 35th anniversary of the Festival international Nuits d’Afrique!

Les Mercenaires de l’Ambiance are a dance machine made up of 11 versatile musicians and singers who perform the great hits of the modern African repertory. From Ghanaian highlife to Congolese rumba, not to mention Nigerian Afrobeat, this is an opportunity for the public to get to know the beats as well as the stories of the African continent.

Vlad, Solo and their niece Hortense recount the historical and political context that led to the often legendary songs, some of whose original performers appeared at the festival.