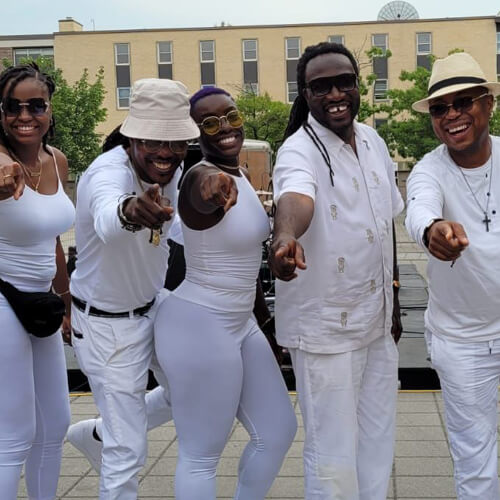 Congolese rumba and soukous top the list with Blaise Labamba.

Blaise Labamba masterfully leads his band with rhythmic burst without reprieve, where long stretches of syncopated chords and improvisations are like dialogues between keyboards and guitars. From rumba to soukous of the purest tradition

Born to a pianist father and chorister mother in Congo-Kinshasa, known then as Zaïre, and growing up in a setting where African music was all the rage, he took up the piano, guitar and percussions. In 1990, he set up his first group, Tout-Chic-Gombé, in the neighbourhood where he lived. From 1993 to 1995, Blaise studied music at the Institut National des Arts in Kinshasa and then joined the group led by a top Congolese star of that era, Général Defao, and his “Big Stars.” There then began a succession of international tours. Blaise played with big names in African music and travelled around the continent. BLAISE LABAMBA SErieS Les Incontournables RD Congo – QC biography Sunday, July 11 – 20h30 Club Balattou In 1999, he settled in Montréal and took his place  on the Canadian scene, accompanying various  groups on stage. After notching up hundreds of concerts, Blaise Labamba launched a solo career in 2009.  In 2018, he formed a group that he called Kotakoli,  using it to affirm his tastes and desires, deftly  blending Congolese rumba, zouk and soukous, with flamboyant energy. As with his live album Personnalité, you won’t want to miss this master of Congolese dance, in the art and manner of Kinshasa!