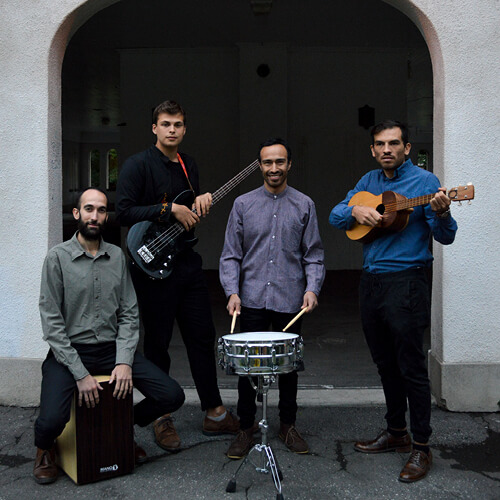 Dos Pesos is a band playing a fusion of traditional South American rhythms founded in 2018. It is influenced by the folklore of the Andes (Colombia, Peru and Ecuador), the afro beats of the Pacific as well as the llanos of Colombia and Venezuela. There are also layers of contemporary influences such as jazz, funk and rock. The end result is tradition-rich, elaborate songs for all to appreciate.

Dos Pesos has existed since 2017. At that time, Ivan (Argentina) and Pedro (Colombia), both having recently moved to Montreal, met and started playing together. Through their exchanges, they discovered a common project, that of highlighting the traditional rhythms of their respective countries while adding a contemporary influence. For Pedro, this inspiration comes from his many travels throughout South America which opened his eyes (and ears!) to the different cultural folklore of the continent. His youth spent in a village proud of its Colombian roots also has a lot to do with it. Ivan, for his part, grew up in an environment where music was omnipresent from a very young age, his father being a musician and violin maker, instilling in him influences that have marked the history of Argentinean and contemporary music. His travels in Argentina have only strengthened his conviction and his musical culture. From the very beginning, Dos Pesos made it a priority to use traditional South American rhythms in their compositions. The reaction of the public to their songs influenced by Latin rhythms is enthusiastic. But they still lack the voice and percussion that will define their project.

A few months later, the two musicians organized auditions to find the rare pearl of a singer: in addition to having an exceptional voice, she also had to be trilingual. That’s when they met Helena Dardelet (Dominican Republic), who was finishing her studies in music at Concordia. This is her. Then, José Miguel Valero (Spain) joins the group, enriching it with his experience in percussion. His years of experience are immediately apparent. In the spring of 2019, Dos Pesos makes a habit of playing some of its songs in front of an audience at the Dépanneur Café, during the Sunday brunch. Finally ready to present their own songs, the group organizes their first official show at M Montreal, on June 1st 2019. The room is packed and the compositions are well received. Another performance at the Bar Social in Verdun follows a few weeks later. The rest of the summer is used to polish the new compositions and practice seriously for a recording. Josué Laguna (Mexico) joins the band as a drummer in July.