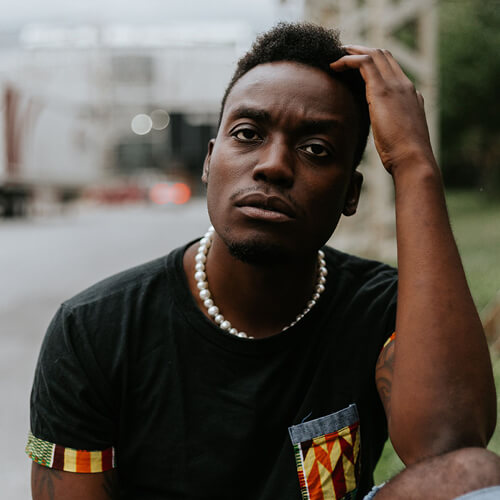 Ketsmy is an upcoming songwriter, composer, musician and singer from Montreal. He is born in Montreal in an Haitian family, this cultural mix transpires through his art, switching from French, to Kreyol and English, his songs have powerful themes, adressing social and racial issues inflicted on the BIPOC community. His message is delivered with a voice with powerful Soul, layered on drum beats with a dancing rhythms. He takes the auditors on a trip between, R&B, Hip-Hop, Blues-Rock and Afrobeat.

Ketsmy, is a working artist for already 4 years, being frontman on many musical projects in Montreal as: Funkish Chavez & Orso Black. In february 2021, he released his first single announcing his debut album fro his solo career: Melanin News. A deeply personal project, in which Ketsmy creates a portrait inspired by his reality, the beauty in black culture but also his sense of belonging in a society that doesn’t even acknowledge systemic racism. One year after the release of “Woy”, in february 2022, Ketsmy will start his release campaign, droping 3 singles in the following months, from february to april, releasing then his full lenght album on Mai 18th 2022. 15 tracks including Interludes and Samples from the Black Lives Matter manifestations of 2020.