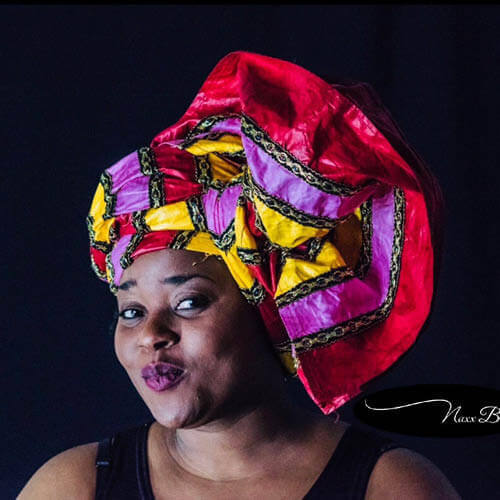 Born in the sunshine of the Democratic Republic of the Congo, Naxx, whose real name is Alexandra, discovered her passion for music at age 9. She pursued this interest in choirs of various styles: gospel, traditional, classical and folkloric. A composer and singer-songwriter, influenced by classical music and by the popular music of her country, she shows in her compositions her admiration for various African beats.

Her artistic generosity, extraordinary energy, melodious voice and, above all, her very personal sound have led her to take the stage at the Festival International Nuits d’Afrique in collaboration with various local artists as well as at the Festival Makossa and elsewhere. With her committed and highly festive approach, she pursues her inspiration in “rumba-soukous” style.

In the spring of 2018, she took part in the Rythmes au féminin series created by Productions Nuits d’Afrique at the Club Balattou. In 2020, she offered four live concerts during the lockdown, her way of bringing people together and paying tribute to various parts of Africa (Central Africa, South Africa, East Africa and West Africa).

Her public return in the Voix des femmes series will have a very special flavour. As someone who has maintained links with her community, who has continued to advance and who has offered a mellow and immersive event will undoubtedly have plenty to share with us.