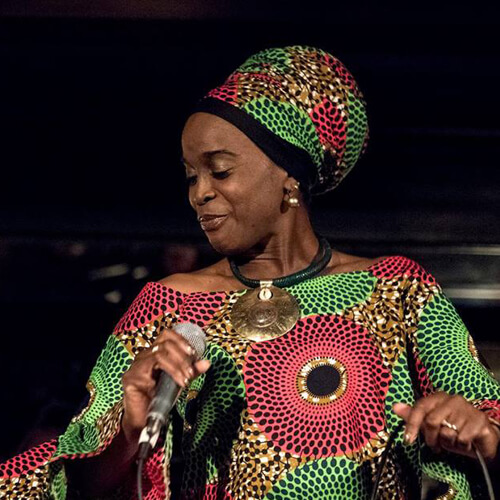 A great admirer of Angélique Kidjo, Miriam Makeba, and Faada Freddy, Carine au Micro doesn’t hesitate to sing in Mina, a Benin dialect that, in her enchanting voice, has such an insane effect.” (Journal Métro, 2018 [translation]) Inspired by discoveries and innovations, Carine au Micro, shakes up genres, blending them while also amplifying their distinctiveness. Echoing Vodou rhythms punctuated by jazz, gospel, hip hop and R&B, her swaying melodies, definitely and divinely African, are decidedly seductive. Her first album, Do to Naa Sé, est attendu is to be released in September 2021.

The traditional beats delivered by this admirer of Angélique Kidjo connect intimately with the freedom of jazz, the spirit of soul, the power of gospel, the authenticity of hip-hop and the vibe of R&B – the sounds that brightened her youth.

Carine au Micro is an artist of Beninese descent whose interest in music began at an early age through her parents, especially her mother. Her attachment to music took a decisive turn in France, where she worked with several emerging artists on the local scene starting in 1998.

Upon arriving in Québec in 2004, Carine joined the Imani Gospel Singers, a Montréal-based choir, helping her become immersed in the local music scene. She took part in 2013 in Mahalia Jackson, a musical presented at the Segal Centre starring the 2010 Juno Award-winning jazz singer Ranee Lee.

Encounters with artists including Lorraine Klassen, Noel Mpiaza and David Mobio were among the steps in his official introduction.

Carine au Micro embarked on her solo venture with her début EP in 2018. Titled O LA SI, this sumptuous disc moves between her various musical emotions: jazz, soul, gospel, R&B and, of course, African musical styles. Her work speaks of her connection with her country of origin but also of love, between personal disappointments and an optimistic vision of the future.

“A great admirer of Angélique Kidjo, Miriam Makeba and Faada Freddy, Carine au Micro does not hesitate to sing in Mina, a Beninese dialect that, combined with her enchanting voice, has a powerful effect.” – Métro newspaper, 2018

Through her experiences, she shapes her personality, opens herself to discovery and is nurtured by the eclectic dynamism that defines her career, here and abroad. Carine au Micro will be issuing her début album, titled Do to Naa Sé, in September 2021.