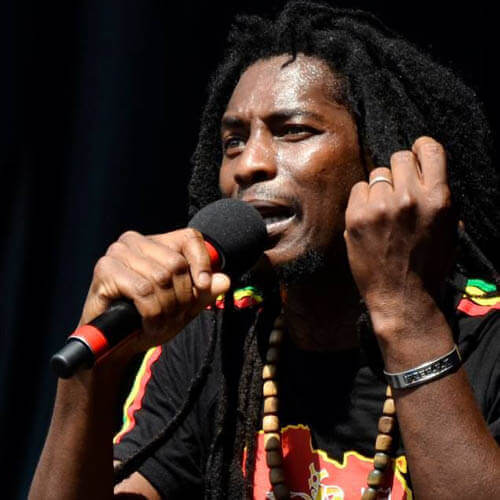 Born in Côte d’Ivoire from Malian parents, Dakka Dembélé began his career with his friend Gounga. They soon developed a fascination for reggae, to which they added Mandinka sounds from their cultural roots.

As they were preparing to bring out their first album in 2002, in Abidjan, the two companions were forced into exile in Mali for social and political reasons. There they met Tiken Jah Fakoly, who served as an inspiration and motivation for the continuation of their careers.

In 2007, Dakka decided to go solo. That would lead him to Québec, where he settled and returned to his initial trade, opening his own shoemaking shop. He makes a living from this work while continuing to develop his passion for music. In tune with the richness and diversity of Montréal’s cultural life, he was on stage in 2013, at the Festival International Nuits d’Afrique, Syli d’Or, Atmosph’air and the Jardins Gamelins, among other settings. During this same period, he undertook collaborations with many local musicians, including Abdoulaye Koné, The Rootsteppers, David Mobio, Namori, Ons Barnat and Solid Ground.

In 2018, he crossed paths with Apotcho Strong and Guy Kaye. This decisive encounter led to a début album, Petit bateau, released on line on March 13, 2020, on the Disques Nuits d’Afrique label. At the crossroads of African and Québec cultures, this rich and captivating work benefits from the contribution of each of the collaborators.

Dakka Dembélé’s sound has very clearly found an echo in the city, which now regards him as the ambassador of reggae in Montréal. The stage of the Révélations series will provide the perfect opportunity for presenting Petit bateau to its future fans!