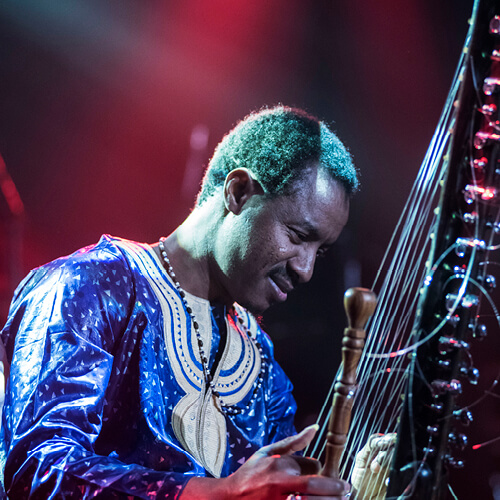 Diely Mori Tounkara is one of the most promising musicians of his generation. Following in his father’s footsteps, he became an undisputed master of the kora from an early age. A true virtuoso, he applies his dexterity to kora playing filled with feeling and subtlety. He perfected his art with family members and other great musicians, historians, storytellers and singers.

Diely Mori Tounkara had the good fortune to study with the greatest masters of the last two decades. He studied with Toumany Kouyaté, now a star musician in the Cirque du Soleil show O in Las Vegas. In Mali, while living with his brother, the great guitarist Djelimady Tounkara, a soloist with Bamako’s Super Rail Band, he perfected his virtuoso guitar playing. He showed great flair in absorbing the teachings of his masters and in developing his own style, with all the respect owed to these musical legends.

A musician of undisputed talent, he was soon admitted to the world of the greats and went quickly from village to stage. Diely Mori Tounkara was a guitar accompanist with the Super Rail Band and performed with great artists including Saramba Kouyaté, Yaye Kanouté, Kerfala Kanté and Mangala, Daby Baldé, Samba Laobé N’Diaye, Mahawa Kouyaté and Aïsha Cissokho, among others.

Seeking to highlight the sound of the kora, he created the Tounkara-Lavoie Trio in 2012 and won several awards: the Coup de coeur awards from the Conseil des arts de Montréal, from ICI Musique and from the Radio-Canada diversity bureau at the 2013 and 2014 Showcases of mixed musical styles. The trio also received the 2014 diversity award issued jointly by the Conseil des arts de Montréal, Vision Diversité, MAI (Montréal, arts, interculturels) and the Place des arts.

His knowledge of traditional Mandinka pieces runs deep, and his compositions are of a genius that reaches people of every origin, from Africa to the West.