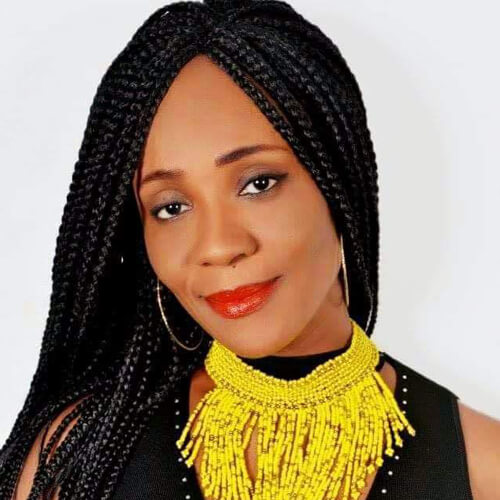 Singer-songwriter Dina Levry, whose real name is Levry Lokplo Nasse Nadine, was born in Côte d’Ivoire,. From her earliest childhood, she was captivated by the music of Kassav, the mythical musical group, with its very popular singer Jocelyne Béroard.

In 2005, Dina joined the famous band of the Hôtel Ivoire as lead singer. In 2007, she founded Bella Mondo Africa, the first all-female group in Côte d’Ivoire and one of the first in sub-Saharan Africa. Several major events followed, among them the World Festival of Black Arts in 2010 and the Antilliaanse Feesten in Belgium in 2012.

In 2016, back from a major African tour, Dina joined the group Ayan B., created by African producer Charly Maïwan. The group performed at many festivals, including the Festival Mondial des Femmes d’Ici et d’Ailleurs in Montréal, the Festival des journées d’Afrique danses et rythmes du monde in Québec City and the Festival des rythmes d’Afrique in Sherbrooke.

In 2019, faithful to her project as an ambassador of Dida rhythms and dances, she settled in Québec to start a solo career. Backed by the Terres Battues agency, Dina took part in the Festival international Zouglou du Canada and at the Nuits d’Afrique cabaret on several occasions in 2020.

Dina was determined to become a popular singer, respected and hard-working. Her main goal in 2021 is to produce her first solo album.