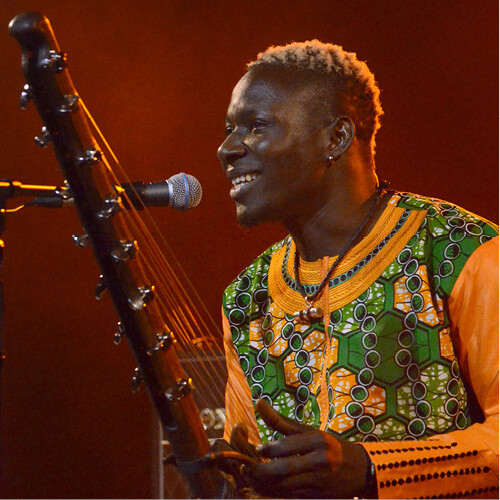 The Mandingo blues that he draws from his 15-stringed instrument, between the kora and the ngoni, shaped with his own hands, perfectly underlines the sweet voice of the young griot. An immersive musical experience in the heart of Mali.

Mamoutou Dembélé, known as “EMDE”, was born into a family of griots in Sikasso, Mali. As griots are the guardians of the culture and traditions that are passed down from generation to generation, he was born into an environment of music, stories and ancestral dances. He is also led to transmit this heritage to others, which he does since his early childhood.

Self-taught, he began playing music at the age of six. With time, he began to understand music from the inside, so to speak. This is how he invented his own instrument, the ”bahouinou” (the strings of a man), which has 15 strings and looks like a mixture between a Kora and a Kamele N’goni (ngoni).

Descendant of the Bwa ethnic group, straddling Mali and neighboring Burkina Faso, it merges the Bwa language with Bambara. The harmonic chords of EMDE transport the audience to the very origins of traditional Bwa music, in a style of Mandingo blues with jazz, funk and reggae accents.

In 2019, he won the Syli d’Or and won the Prix Coup de Cœur of the Conseil des Arts de Montréal as well as the Afropop prize at the 12th edition of the Syli d’or de la musique du monde, which allowed him to perform a concert tour all across Montreal.