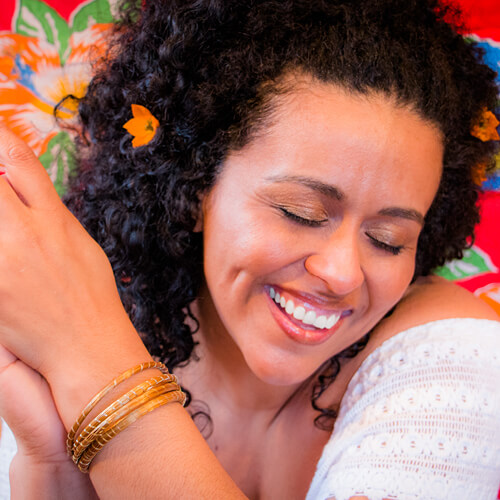 A natural entertainer, Flàvia Nascimento goes from festival to popular event, her golden voice reflective of the hot sun of her native Brazil. Drawing on her training as an actress and her background as a circus performer, she gives moving and sensual performances that exude joy, happiness, and authenticity. Expressive and generous, funny and tender, all at the same time, Flàvia’s luminous personality brings a unique flavour to her original compositions, which she sings in French and Portuguese, are inspired by Afro-Brazilian music as well as Brazilian pop.

Brazilian-born Flávia Nascimento began her artistic career as an actress, with a diploma from the Teatro Universitário in Belo Horizonte.

She performed in the play The Witches of Salem, toured for a year with the musical Mulheres de Hollanda and co-founded the popular education theatre group CaraCara, which makes communities aware of the need to take care of the environment.

Leading circus workshops among troubled youth, Flávia began a career as a clown and stilt-walker. After myriad circus ventures in Brazil, she settled in Québec City in 2001.

This luminous and versatile artist soon made a name for herself on the Québec City cultural scene. Flávia can often be found at neighbourhood or street festivities, popular events and major festivals. Wherever people want to get the fun started, the call goes out for Flávia! The Québec TV show Belle et Bum invited her, leading a segment of the Brazilian show Pé na Rua during a visit to Québec City’s Impérial theatre in 2007.

In 2014, she made use of a family trip to Brazil and a meeting with Brazilian musician Betinho Muniz to record her first solo CD. Flávia then embarked on the production of her first solo show at the Granada Theatre in Sherbrooke, accompanied by her four musicians, whom she affectionately called her Plus Petit Big Band (smallest big band).

The friendship between Muniz and Flávia and their musical partnership led the way to a new album in 2016.

Her initial show was a success, and Flávia followed with many more, appearing at the Luminato Festival in Toronto, the Mundial in Montréal, the Palais Montcalm in Québec City and the Festival d’été de Québec. In 2015, she won the Stingray Music Rising Stars award for a remarkable performance during the event.