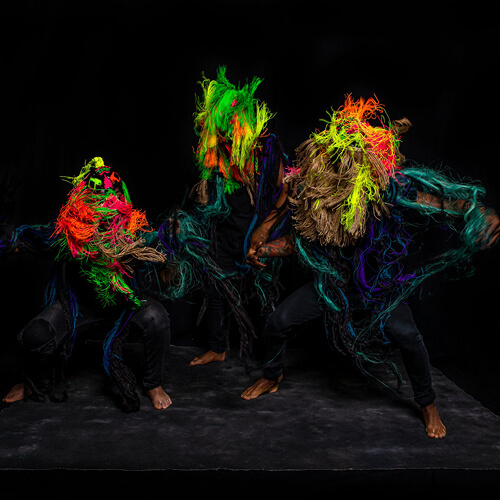 Before coming together to create Ghetto Kumbé in 2015, the 3 musicians toured the world with projects such as the legendary fusion band Sidestepper or the Salsa band La 33.

Ghetto Kumbé is a combo of singing and percussionist wizards who summon audiences around the world and the pagan spirits of digital and conscious rumba. Impossible to resist their dance-trance ritual. It’s a powerful elixir of percussion, Caribbean electro beats, traditional West African and Afro-Colombian rhythms, and Afro House.

Ghetto Kumbé is inspired by the different revolutionary movements that are born in the world to launch its first album co-produced with the English The Busy Twist, in 2020 on ZZK Records, the pioneer label of Latin American electronic music. This intense, committed and rebellious self-titled debut album denounces inequality and abuse by corrupt governments over frenetic beats while drawing listeners to join the struggle.

His first single “Vamo a Dale Duro” is a critique of the divide between rich and poor, the increasingly corrupt politicians and the all-powerful capitalist system. The tone of the album shifts seamlessly between each song, which contains ancestral chants, deep and resonant voices, crowd-raising and inspiring anthems.