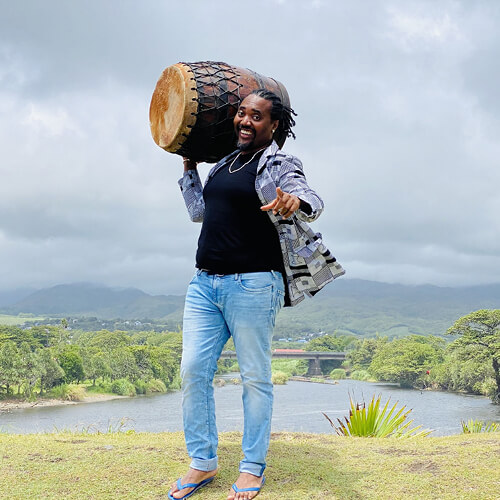 Lindigo is a story of love for Reunion Island, for its land from which rhythm springs, its sky that offers dreams and its ocean that leads to the discovery of other worlds. The name is that of a plant with refreshing virtues like those of their maloya.  In 20 years, this love has continued to grow stronger, to be enriched by new encounters and new paths.

It all started in Paniandy, a poor neighborhood of Bras-Panon, a small town in the east of Reunion Island. Olivier Araste, a precocious musician, grew up working in the sugar cane fields where encouraging songs and sèrvis kabaré, these ceremonies in honor of the ancestors galvanized by the rhythm of maloya, resound.

The island is a crossroads of cultures where the descendants of slaves, from Africa, India or nearby islands, have preserved and creolized their rituals, their languages and their music to European contributions. His imagination is nourished by the examples of Granmoun Lélé, Alain Peters or Rwa Kaf as well as those of the Fugees, Fela Kuti or Marley. On the guitar, percussion, vocals or accordion Olivier is involved in many local groups. In 1999, he met his soul mate, Lauriane Marceline, with whom he created Lindigo.

Kosa Néna, the record that marks their 20th anniversary, has a power that owes only to them. Olivier Araste produced it, the musicians of Lindigo play all the roles. They sing of their country, Reunion, Madagascar and Africa, of the earth and the sky, they bear witness to the pain of the destitute and the ecological threats, but also and above all to the strength of friendship and love. Their maloya is always from the heart.