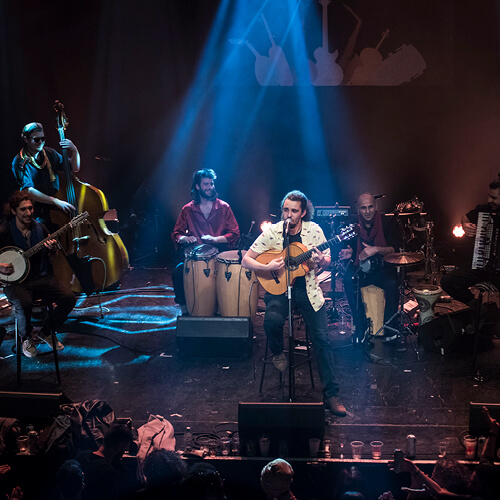 If the sirocco is a burning wind that blows the red sand of the Sahara towards the North, for the past year the artistic group has also been infusing a southern musical aesthetic on the Montreal scene.

Syroko draws its primary inspiration from the rich tradition of Algerian Chaabi, a generous musical source that colors the melodic and rhythmic background of the group. What is chaabi? It is called the jazz of the Casbah, this fruit born from the meeting between the Arabo-Andalusian classical music and the Maghrebian poetic heritage.

The alchemy between these two traditions, one musical, the other literary, has given birth to a lively and ambitious style of interpretation. Its universal scope was expressed during the popularization of the very famous piece Ya Rayah, which Syroko interprets during his shows.

Substantially animated by a spirit of fusion and eclecticism, Syroko claims this legacy that he dares to revisit and redefine endlessly. The plural colors which impregnate its musicality give meaning to a story born from the meeting with the other. This is why the universes of rumba, jazz, bolero and cumbia scratch the versatile identity of the group. And in the light of its state of mind, the group is at the crossroads of melancholic romances, committed lyrics, and burlesque songs. As long as the heart is in it, Syroko will sing the intoxication of love, the indignation in front of the world and the comedy of the vicissitudes.

Equipped with their guitars, their violin and accordion, their double bass and percussion, the seven members of Syroko revisit and compose works in Arabic, Spanish and French according to their inspiration.

“The victory of the group Syroko was not in doubt, the orchestra marrying with elegance Algerian chaabi, Andalusian music and French song” – Le Devoir 2022