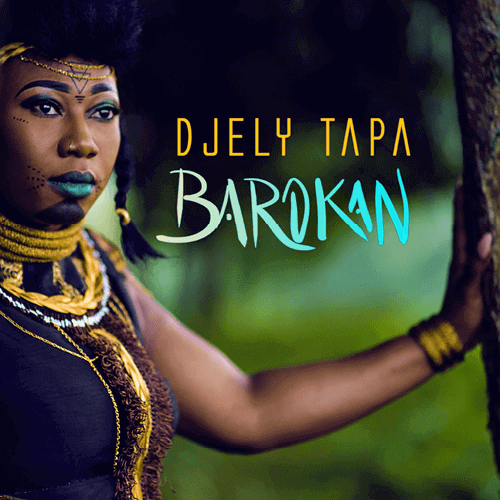 « Hail to you my ancestors! From time immemorial, the African Women is a symbol of strength, beauty and gentleness. She has always been, and she’s even more today. My veins full of Gnagarigassa (mandika warrior) energy. I am the future ! Proud of my identity, without complex, I explore the world with my scars as a passport.”

Montreal’s African community has long welcomed young people who have thrived on the city’s stages. A daughter of griots, little Djely Tapa (whose real name is Sountougoumba Diarra) grew up with her grandmother in Kayes, a village in western Mali, while her mother, a singer and one of Mali’s great voices, focused on her career. She collaborated with the Orchestre de Paris, among others, and developed Mandinka tradition by blending it with modern instruments.

A convinced feminist, Djely Tapa walked resolutely in her mother’s footsteps and, in her work as a female griot and singer, defended the place of black women in a modern egalitarian world. When she left for Bamako at age 11, she embraced western culture and decided to pursue studies that she hardly imagined possible, given her social mission as a griot, which maintains ancestral values and culture and conveys the history of the Mandinka people through song, dance and traditional tales.

After earning a bachelor’s degree in science, she dreamed of becoming an airline pilot, and she settled in Montreal to study mechanical engineering and aeronautics at the École Polytechnique. Her dream did not come to fruition, and, since the African community lacked a female griot in Montreal, she felt the call of tradition and took up the mission inherited from her parents.

Well integrated in Québec society through her studies, she also linked up with the community of musicians, becoming involved with several groups, in particular with Zal Sissokho and the Cirque Kalabanté and as lead vocalist with the group Afrikana Soul Sisters.

After a decade on Montreal stages, Djely Tapa met her greatest friend and collaborator, Chadian artist Caleb Rimtobaye, former vocalist with the group H’Sao and now known as AfrotroniX. Named top African DJ in 2018, he shares with Djely Tapa the vision of a new African music that incorporates electronic styles and is carried by the tide of Afro-futurism.

Barokan, the singer’s first album, was produced by AfrotroniX on the Disques Nuits d’Afrique label and was released early in 2019 to immediate critical acclaim. The 11 songs, performed in the Mandinka, Bambara and Kassonke languages, pay tribute to the strength of African women and to youth, together with calls for the protection of water resources. The singer’s powerful voice is backed by auras of Sahel blues and electro sounds skilfully measured by AfrotoniX. The true essence of Mandinka Africa is revealed, with kora, guitar riffs and Malian percussions as well as female choirs.

Named 2019-2020 Radio-Canada Revelation in world music, Djely Tapa clearly has the makings of a great singer and is destined to become known far beyond Canada. On June 29, 2020, her album BAROKAN won the JUNO AWARD for Best Canadian Album of the Year in the World Music category.