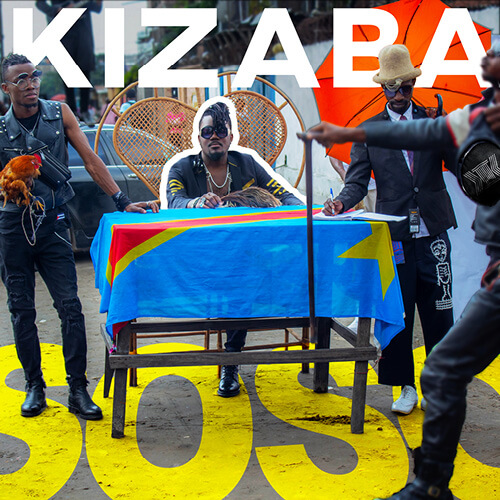 Written and composed by Lionel Kizaba, Soso (chicken in Lingala) is an infectious midtempo summer song dripping with catchy hooks and funky inflections, a modern soundtrack for the ultra-fly Congolese subculture of sapologie. Inspired by the neighborhood in Kinshasa where lead singer Kizaba grew up, in the shadow of the legend of Papa Wemba, the song tells of a quarrel between two neighbours that is finally reconciled over a shared meal; an afrofuturist urban parable on the difficulties and rewards of living together.

Soso will be available on all digital platforms on July 23. Congolese Musique will be out in March 2022 on Les Disques Nuits d’Afrique.

Kizaba is a Congolese Afro-Electro group based in Montreal, Canada. The quartet is heavily influenced by the Congolese stylistic tradition of “Sapologie”. The group seeks to infuse contemporary afrobeats and electronic music with melodies and rhythms from Congolese traditions. It is the creation of musicians Lionel Kizaba alongside Pierre Belliveau from Quebec and features guitarist  Éric Kapiteni (Gamme Roz), formerly from the group Les Washiba . The live show features custom visuals made in partnership with Congolese plasticians from Ndakuy ya la vie est belle de matongé.

Growing up in Kinshasa, Lionel first began playing drums in church at the age of 5. He quickly became an in-demand musician with groups, including Jupiter & Okwess, Vodacom Superstar, and many others. He studied jazz at the National Institute of the Arts in Kinshasa, all while playing soukous in clubs after hours. After moving to Montreal in 2011, he quickly gain recognition as one of the best drummers in the Canadian world music scene, playing with groups including AfrotroniX, Mélisande [Électro-Trad],  Zab Maboungou, Sébastien Lacombe and others.

Kizaba launched its first album, Nzela, in 2016. It garnered numerous prizes at the local level and led to touring across Canada for the band. Kizaba is now working on its second album, Congolese Musique. Dancefloor heat for fans of Tony Allen, Chris David, and KOKOKO!