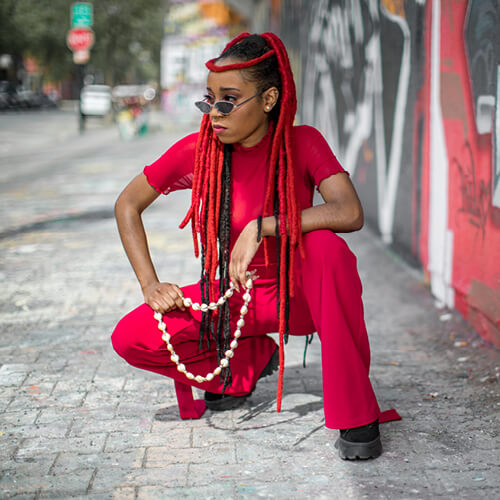 “The Congo runs through my veins, my songs are imbued with its likeness,” says Joyce N’Sana, who exorcises the dark times she lived through during her country’s civil war by delivering a message of peace and harmony through her powerful, soulful voice. A natural-born performer from a family of musicians and inspired by Ivorian artist Dobet Gnahoré, this singer-songwriter combines reggae, gospel, hip hop, jazz and Afro-blues into what she calls “Afrobluehop” — an intoxicating cocktail that has earned her several awards. Joyce N’Sana has been chosen as the Révélation Radio-Canada en Musique du Monde 2021 and will be releasing her new EP sometime this year, so be sure to an eye out for it!

Joyce N’Sana’s deep, soulful voice caresses her words marked by a message of peace. Her musical style, which she has named Afrobluehop.

This singer-songwriter grew up against the backdrop of the Congolese wars. She delivers a clear, determined message, conveying an art of peace. A small woman with a big voice, she offers a flavourful blend of Afro-blues and hip-hop, adding her feminine reggae. Her amazing stage presence leaves nobody indifferent. She sends her audience on a roller coaster of emotions, both through her rousing beats and her alternately sweet and husky voice.

It is not by chance that Joyce N’sana has won numerous awards over the last few years. This Congolese-Québécoise brought out her début EP in March 2016, and it remained number one in Canada all summer long in the World category on the Earshot chart. It was named “world music album of the year” by CJLO radio. In 2017, she appeared on the TV show La Voix, and she won the Montréal final of the 2018 Landmark Events Showcase. She was a finalist in the 2019 Vitrines XP and will be issuing her new EP in 2021.

Joyce will be presenting her new show and her new album, Obosso, on July 7 at the 35th edition of the Festival International Nuits d’Afrique.