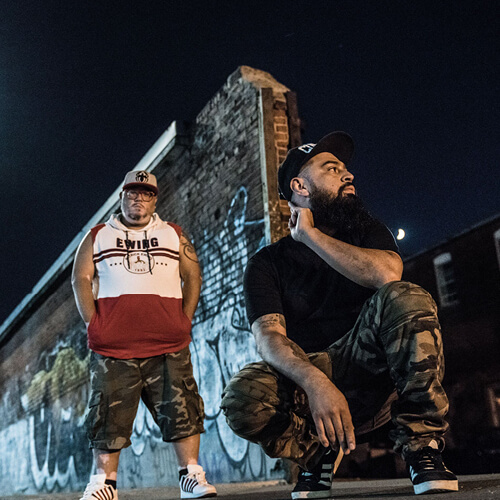 Since 2006, this group has been chanting its rap lyrics in Spanish, together with a strong dose of electro. Sonido Pesao is a Montréal-based Latin urban / Latin rap group. Their compositions energetically blend urban music, cumbia and electronic elements, backed by contemporary Latin beats in tune with new Latin American cultures.

The group, founded in 2006 and previously named Heavy Soundz, now fully assumes its Hispanic identity, with its name translated to Sonido Pesao.

Since the release of their album Tumba Parlantes in 2011, they have toured in Québec and across Canada, spreading their love of cultures and their contagious joie de vivre.

The first-prize winner in the 6th Syli d’Or of World Music at the Club Balattou in Montréal, they have collaborated with various artists including Tomas Jensen, Ramon y su Son and Lengualerta (Mexico). They used their third appearance on the TV show Belle et Bum in November 2015 to showcase their extraordinary stage performances.

These stage animals stormed back in 2016 with the album Reir Para No Llorar. Acclaimed by both the press and the public as one of the top Latin-urban albums of the year in Canada, this great success earned them a nomination in the Canadian Latin Awards.

In 2020, they returned with their latest album, Todo Revuelto, a musical tour de force, resolutely in tune with urban and Latin culture worldwide. The album presents a mix of cumbia nueva, reggaeton, hip-hop and electronic music, with a touch of “old school” offering a truly unique and contagious blend of influences.